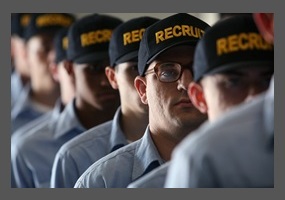 Does the military purposely go into lower socioeconomic neighborhoods and schools to recruit?