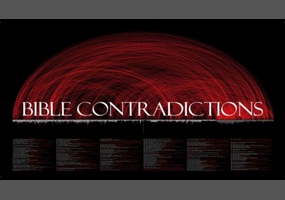 Are all Christian religions fallacious because they cherry pick the Bible without justification?

Asked by: Sagey
Are all Christian religions fallacious because they cherry pick the Bible without justification?
53% Say Yes
47% Say No
Leave a comment...
(Maximum 900 words)
Sagey says2014-02-07T00:32:24.993
Report Post
Oops 4got to take the Are out when I changed it from a statement to a question. Time limit I would blame on this, work is starting to get busy.
Sagey says2014-02-07T02:00:34.713
Report Post
If anybody takes any work of literature and only accepts those bits that suit their particular Biases and ignores all that don't suit their Biases, then they will not be interpreting the literature in the way that was intended by the Author(s).
Thus their interpretation is Confirmation Bias Based and Wrong or Fallacious.
All Christian sects I've looked at practice this Confirmation Bias interpretation of the Bible, even Theology commits exactly the same Cherry Picking or Selective acceptance of passages based on Bias, fallacious interpretation.

The only way to interpret a piece of literature in the way that the Author's intended it is to accept the entire work.
If the Authors added an addendum stating that passages a, f, x and y are intended to be metaphorical or ignored, then there is justification for those passages to be ignored or considered as metaphor.
Or if the passages themselves have introductions stating that ignore this next paragraph or the next paragraph is not intended to be considered truthful, there is justification for considering them as such.
But, the Bible does not have such addendum nor introductions within, so the Authors intended every word to be taken as Truth.
To say otherwise has no justification whatsoever.
Theologians are worse than most Christians at fallacious cherry picking, and what's worse, they consider themselves their own justification.
Now that's what is diagnosed as Narcissistic Magalomania.
Because a theologian knows no more about the "Mind Of God" than any lay person who has read the Bible as well.
They only fallaciously cherry pick to make themselves appear as if they do know more.
Sagey says2014-02-11T23:44:04
Report Post
Though I have also learned that many of the Books of the modern Bible have been corrupted and huge chunks of the Bible had no traditional authors, but were added to by more recent interpolations in order to change the meaning of scriptural texts to be more in line with a different form of reasoning than the original, traditional authors intended.
The councils of Nicaea and other Bible review and collation gatherings were examples of adding fabrications to the Bible scripture.
There were actually 40 Gospels from which the 4 canonical Gospels eventually became chosen and these were the ones that were closer to what those choosing the Gospels wanted the Bible to portray. Thus the Bible is really a political document, that supports the agendas of the conveners of the councils that altered or fabricated the scriptures.
Constantine turned it into such a political document for his own agendas.
Privacy Policy | Terms of Use
Sitemap | View Desktop Version
©2022 Debate.org. All rights reserved.