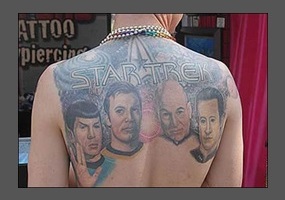 Are tattoos negatively stereotyped in the United States?

Tattoo, United States, Stereotype, Recreation
Are tattoos negatively stereotyped in the United States?
78% Say Yes
22% Say No
Load More Arguments
Leave a comment...
(Maximum 900 words)
Eva says2013-02-17T14:20:12.047
Report Post
Overall, tattoos will always be judged, some people like them others don't - in the end you must decide for yourself. I have seen and know very respectable people who have them and know very disrespectful people who don't have tattoos...tattoo's should not define who you are, but in the world we live in, in most cases they sadly do...still will not stop me as it's my life, and I am not here to impress anyone else.
Anonymous says2013-05-02T01:16:32.647
Report Post

I believe tattoos are negatively stereotyped. Always have been, always will be. I myself love tattoos. What some people fail to understand is that a tattoo isn’t just ink on our body it’s what makes us who we are. You can say it's trashy, you can say it isn’t classy, its body vandalism, it doesn’t matter what you call it, it's us. It’s who we are, so why judge? Everyone has their own way of expressing themselves and this is a way for some of us to do it. Something we love. If you don’t like it, good for you! Why do you have to open your mouth and try and bring other people down that have tattoos? Our bodies we can do what we want with them.
Anonymous says2013-06-10T07:30:43.797
Report Post
Generally, tattoos in my opinion at least, bear no meaning in my life. Of course, many see it as an art, stigma, stereotype you name it. The only problem I have with tattoos is when they are extreme (nudity, racial, political or offensive) in nature specially in public (of course it's relative). My lady has tattoos, but none nothing offensive or extreme for public eyes specially near children. They are many ways to express myself and tattoos is not one of them. I think it's a bit morally presumptuous to think we can tell others what they should or should not do with their bodies. It's no different that someone telling me how I should spend my money. I say do as you wish as long are you are not harming or offending others with your ink. Keep in mind you have every right to ink yourself just as employers have every right to deny you a position or opportunity for employment.
skillidiomas says2013-11-04T19:36:02.410
Report Post
Well, the subject of tattoos is very polemic. Many controversies are involved, because many people believe the tattoos can cause a bad impression or in the future you can regret them, but I think this is a rude thought, because when you decided to make a tattoo your thought has to be a mature one. The tattoo is a register of a moment in you life, it has a meaning or it can be a homage to someone you like. Of course many people have prejudice, but the person’s opinion is the focus! If the person has a willingness, I think the person has to do it, but pay attention, you need to choose a good tattooist, see if the person is confident and of course if the material is new, because of the needles you can get infected.
So, do a tattoo! Pay attention to the material and choose a good drawing!

Nara Machado Rockenbach, Vilhena, RO, Brazil
Skill Idiomas
skillidiomas says2013-11-04T19:36:40.653
Report Post
I think that the choice to do a tattoo is exclusive of the person that is doing the tattoo. He/she determines what to draw in his/her body. He/she can put anything but needs thinks what to put and where to put because in the future he/she can regret.
There are some things that disturb the professional and the personal life when the person does the tattoo, such as: lose the job, cause bad impressions, call attention of people that have prejudice against this and can infected.
Although the tattoo has many cons, can be a good permanent homage to someone that you really love, can be a register of a good moment in the life and can express how people are.
So if you really would like to do a tattoo search for a good professional and decide for something that you will never regret.

Eduardo Cerrutti, Vilhena, RO, Brazil
Skill Idiomas
skillidiomas says2013-11-04T19:42:46.570
Report Post
I like tattoos. Depends on tattoos. I think that they are beautiful, such as a homage for someone they like, but when the person does a tattoos without a purpose it is immature. I think about doing a tattoo, but, in the first place, I think about my professional life. I know that many people have a bad impression about this kind of person but it is the person's decision. Other factor that is very important when somebody will do a tattoo is the pain, because the tattooist uses needles and it is painful. Another thing about the needles is that is that the person can be infected by this. And the most important is about the future, the tattoo is permanent and I can regret this. Gabriela Lotti, Vilhena, RO, Brazil. Skill Idiomas
SweetTea says2014-03-12T20:56:04.093
Report Post
Ironically, the Latin word for tattoo is "stigma".
Rapolho says2014-05-14T05:07:45.880
Report Post
Just look at the picture at the top of this page. Why would someone want to walk around with a stupid star trek tattoo for the rest of their lives. What an embarrassment! And that goes for 95% of all tattoos I have ever seen, which I guess leaves 5%, and even those usually are unattractive.
TheINFJNala says2014-09-06T22:37:08.243
Report Post
This is what the majority of tattoo-haters should tell the majority of tattooed people:

"I hate tattoos. I think they are ugly and they mutilate your body. I don't understand at all why anyone would want one when you could just get a painting, shirt, or whatever other art form.

Why can't the narrow-minded people say this?
TheINFJNala says2014-09-06T22:39:52.810
Report Post
In other words, hate the tattoo, not the person who wears it.
TheINFJNala says2014-09-27T23:35:09.403
Report Post
Oh, and also: Redheads were considered children of the devil. But that has been proven to be a myth. So why can't the stereotype be proven a myth?
Privacy Policy | Terms of Use
Sitemap | View Desktop Version
©2020 Debate.org. All rights reserved.