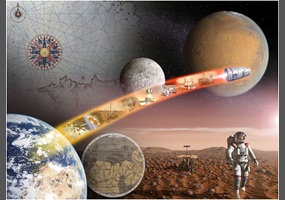 Are we wasting taxpayers money by heavy spending on space exploration?

Technology, History, Barack Obama
Are we wasting taxpayers money by heavy spending on space exploration?
33% Say Yes
67% Say No
Load More Arguments
Leave a comment...
(Maximum 900 words)
kaister says2014-02-11T16:29:25.433
Report Post
If any space exploration should be privatised given the current global system. People like incentives for what they do. In this current world, it's about money. Every where it is about being money minded. So if private organisations are given the opportunity to expand into space, we will see much faster growth in space exploration and can ease burden on governments spending for it.

However it also brings along with it problems such as, space exploration becomes something only meant for the rich. Which is as good as saying healthcare should be something only for the rich. So honestly speaking. Many problems being faced are by product of this current global economic system we have going. Problem is nobody can think of any other better system. Not only that humans must also mature to think as a species, to see as the human race and not America, Europe, Asian and so on. Only then space exploration would even be worth it. No point colonising Mars, if we bring along our habits of shooting rockets at each other.
Privacy Policy | Terms of Use
Sitemap | View Desktop Version
©2020 Debate.org. All rights reserved.