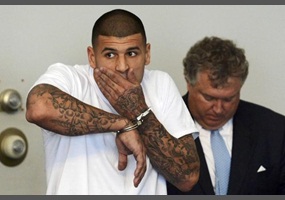 Are you surprised by NFL star Aaron Hernandez's prison fight?