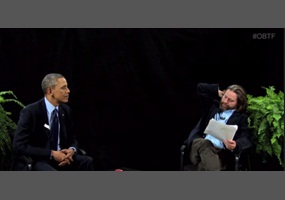 Between Two Ferns: Would Barack Obama be a good comedian?