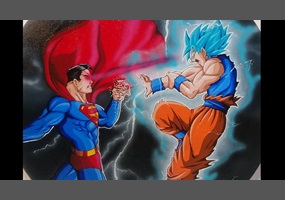 Asked by: Truesaiyanrose
Can goku beat superman?
50% Say Yes
50% Say No
Leave a comment...
(Maximum 900 words)
orangeglasses says2018-12-27T07:01:59.733
Report Post
My vote goes to Goku because it looks like Goku is more powerful than Superman here is a comparison of their powers https://justotakuthings. Com/blogs/news/ultra-instinct-goku-vs-superman-who-would-win
Privacy Policy | Terms of Use
Sitemap | View Desktop Version
©2020 Debate.org. All rights reserved.