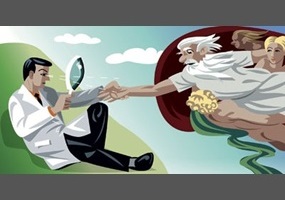 Can science and religion coexist?

Religion, God
Can science and religion coexist?
64% Say Yes
36% Say No
Load More Arguments
Leave a comment...
(Maximum 900 words)
Anonymous says2013-04-07T23:37:26.523
Report Post
It seems to me that the grand majority, if not everyone on the negative side is defending science as a higher form of thought. I do believe this debate is about whether or not they are compatible, not whether science is greater or to put down religious thought.
Anonymous says2013-09-02T04:25:40.140
Report Post
Live in peace knowing people have different views. Thats how we survive.
Smithereens says2013-10-07T09:16:22.280
Report Post
I don't believe it is occurring to many on the No side that religion and science are current coexisting...
Shannoan says2014-04-11T03:19:10.633
Report Post
I tend to keep both eyes open. Say religion is one and science is the other, keeping one open and shutting the other works for many, but I think they are always half blind. Seeing life with both views simultaneously makes for the clearest picture. If mankind ever shut one eye for even a second, we would lose this balance.
Privacy Policy | Terms of Use
Sitemap | View Desktop Version
©2021 Debate.org. All rights reserved.