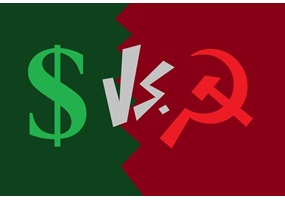 Capitalism vs Communism
0% Say Yes
100% Say No
Leave a comment...
(Maximum 900 words)
miscdebate says2021-01-17T12:52:58.277
Report Post
Capitalism (market economy), In particular of large scale is anti-democratic, Contrary to the most popular opinion. Let Government/Society own large corporations. Let work be investment (not stock/share market or the like) and get paid corresponding to quantity and quality. Let innovation, Wherever relevant, Be encouraged. There be limit to wages, Wealth/assests etc. Both on the lower as higher side. Let personal freedom be given its importance.
Privacy Policy | Terms of Use
Sitemap | View Desktop Version
©2021 Debate.org. All rights reserved.