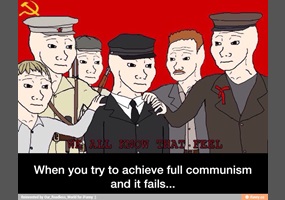 Communism is the worst political ideology to be conceived, Who can “try” to change my mind?