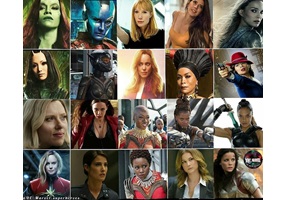 Could Wonder Woman win a fight against EVERY SINGLE MCU female hero?