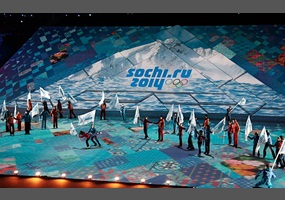 Did the Sochi Olympics increase President Putin’s popularity in Russia?