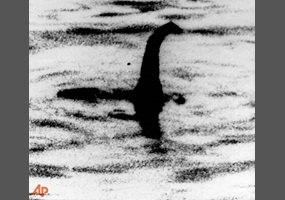 Do any of these exist: Loch Ness monster, Big Foot, Abominable Snowman, aliens?