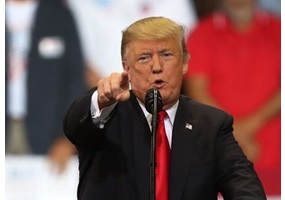 Do you agree with what are president is doing for our country?

Do you agree with what are president is doing for our country?
56% Say Yes
44% Say No
Leave a comment...
(Maximum 900 words)
ladiesman says2019-02-17T21:08:00.283
Report Post
Trump is not doing any service to this country, He is doing us a disservice. For someone who was born in America, He is very un-American. He has no respect for any of the principles that America was founded on and what defines us. To give the most recent example of many, He declared a national emergency, Invoking emergency powers to build his wall on the Mexican border just because Congress refuses to approve it. He is trying to bypass Congress, The Constitution forbids the President from funding projects that Congress will not approve, But Trump could care less about our Constitution. We cannot let the president run the country on his own. And after Alec Baldwin went on SNL and mocked his national emergency speech, Trump tweeted that the "Fake News" is the real enemy of the American people and called for "retribution" against NBC News and SNL. That's what authoritarians do; when their power is challenged, They attack. The only other president that I know of who was as dictatorial was Richard Nixon. After the New York Times published the Pentagon Papers in 1971, He attempted to censor them. And after the Washington Post published more pages of the McNamara study, They were taken to court and the Supreme Court ruled in favor of both the Post and the Times. After the ruling, Nixon banned the Washington Post from the White House. Trump is trying to do the same thing; he's attempting to prohibit CNN and other news studios from the White House. After Alec's SNL episode, He called for NBC News' license to be revoked. This is what tyrants do. Trump, And Nixon disregard the fact a free press is a fundamental element of our democracy, The press is to serve the governed, Not the governors.
ladiesman says2019-02-18T04:49:39.453
Report Post
Another thing about his national emergency: under constitutional law, A national emergency can only be declared in urgent situations such as armed rebellion or imminent invasion. We are not being invaded by Mexicans. And because Congress is refusing to fund it, He is shuffling money from more worthwile projects. One of them includes housing for families of active troops, They are housed in moldy units infested with rats and mice, And Trump is taking that money that was approved to improve that housing to fund his wall that we do not need, And will not work in the long run. Unbelievable!
Privacy Policy | Terms of Use
Sitemap | View Desktop Version
©2020 Debate.org. All rights reserved.