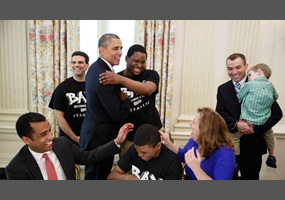 Do you support the "My Brother's Keeper" initiative that Obama recently spoke about?