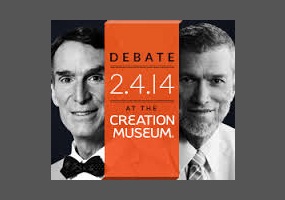 Do you think that Bill Nye won the debate with Ken Ham?

"Whatever his intention, Nye is sitting down as a representative of "evolution" against Ham, implying that there are two equal sides to a debate that has already been settled scientifically. By simply agreeing to participate, Nye is simultaneously elevating the proponents of Biblical creationism, while marginalizing his own position. " [http://www.Thewire.Com/national/2014/02/creationists-have-already-won-tonights-bill-nye-vs-ken-ham-debate/357714/]
TedTheAtheist says2014-02-06T03:50:36.683
Report Post
Nye tried very hard to have a logical discussion. Ken Ham, at no point, attempted to be logical.
When asked for evidence, Ham just referred to the stupid bible.
There's really not much else to say - Ham got hammered.
SPENCERJOYAGE14 says2014-02-06T16:53:28.203
Report Post
Bill Nye showed the he had no idea of what was in the Bible or what Ken Ham believed in, how can he prove that the Christian worldview is not viable if he knows nothing about it?
Privacy Policy | Terms of Use
Sitemap | View Desktop Version
©2020 Debate.org. All rights reserved.