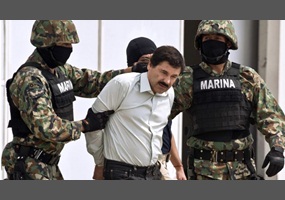 Does the arrest of “el Chapo” mean Mexico is winning against the drug lords?