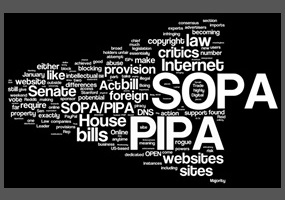 Does the Internet need censorship?

Censorship
Does the Internet need censorship?
33% Say Yes
67% Say No
Load More Arguments
Leave a comment...
(Maximum 900 words)
Quan says2013-06-08T14:13:05.730
Report Post
Nothing says misplaced priorities like rampant censorship.
Anonymous says2013-09-06T17:43:17.957
Report Post
If its good enough for you its good enough for me :D
Notafraidofyou says2014-10-23T16:14:46.423
Report Post
If you want to know why the internet needs censoring? Read all the anonymous comments from people who use anonymity to insult others. There is your problem right there. They wouldn't say it to your face. Like...Ever....
crock says2014-12-02T06:37:25.540
Report Post
I appose censorship of any kind. Especially when someone claim's it's to protect the children. That's a load of crap. If someone doesn't like what they see then quit looking. As for the kids , we should help them to understand the right or wrong of it as we understand it then let them form their own opinion. That is the first step toward teaching them how to practices self censorship.
CaptainGinyu says2015-03-12T01:10:11.970
Report Post
Its an agenda to keep the truth off the internet, so they can make up their own truth. The American Internet is already being censored, and has been since 2003. After 2003, all the major search engines were altered to not give you exactly what you searched for. I remember getting stuck on games, and suddenly I was frustrated as it took longer to find the solution. Before 2003 you could type in virtually any quote, and it would ping up a few thousand times. Clearly, you arn't the first person who ever thought of that were you :D. Click the link and read what they have to say. Anyway, it will only get worse, as they're forbidding the use of newspaper Articles. Whether we like it or not, the internet will continue to be censored, right underneath our noses, at a slow steady pace so we do not rebel and are astonished at the actions. Keep in mind, alot of the elite want you dead which is why they push the unhealthy American carb diet through their media. They want you dead and push you to get a flu vaccine when you could get a chronic sore throat from influenza and die. Its an Agenda to kill us and make us uninformed. So its a good thing in my opinion to have a doctor's opinion on the internet, or just a random health fanatic's opinion, many times its a combination of both. They present the information and then you decide. China is currently being censored, they forbid the use of Youtube, Facebook, Google, and Cnn. Its part of the world agenda to keep information off the internet, because they want total control over us, and control our ideas. Many might say they're planning for our demise, which should definitely not exceed 60 years. Now don't get me wrong many of the vaccines are necessary, for disease that was known to kill 1/4th of the population in the past, like measles, smallpox, and other things. But injecting yourself with Influenza, with people who are immune compromised which is alot of Americans on the high carb no nutrient diet are, these vaccines are a death sentence. So the internet should not be censored. Its best for all the information to get out, the right stuff, and the wrong stuff. Stop suing doctors, the information is all on the internet, hold yourself accountable for your actions, and do the research yourself. This is what the internet is for, and should be used for. The media pushes the wrong ideas many times, and pushes wrong information. So more opinions shouldn't harm anyone. We need to be able to contest what we're being told, whether its right or wrong. Everyone should be free to speak their opinion, whether they're a devious media elite, a doctor, the average person, a health fanatic, or just a crazy person. The media elites are usually selling something, whether it is bread, milk, eggs, corn, meat, sugars from fruit, or any kind of refined sugar. Its good to not have the approval of the media Gods. Youtube is a good tool for this, you can search doctors, regular individuals, and health fanatics. The doctors win every time. But you know, the power of all the opinions is a good tool. If I were a media God I could tell you anything, and expect you to believe it, maybe I would push the diabetes carb diet. Here have a Burger and a milk shake, Bread is perfectly healthy! Oh all the sugars you've eaten for the past 10 years gave you diabetes, and now your blood clot, and now your dead, that’s a tough break. Death will not be fun, but we all will experience it some day. Excuse my ill humour. Unhealthy people make me sad, I don't want them to die.
Northshore_hero says2016-05-23T00:43:36.927
Report Post
In a world where the internet and social media has played a central role in our communication, imagine if all of that was taken away. This happened in Egypt where citizens went from being connected to the world, to being completely cut off from it. Once a place where people were able to talk with one another had been taken away from the citizens of an entire country. It’s amazing to think of the success and power of the internet helped take down a corrupt government by providing a simple platform for people to communicate. No government should have the right to limit or control internet access.

In our world Today, most people have the right to read whatever they want, write whatever they want, all with very minimal government control. So why should the internet be any different? The internet should be a free place that allows people to freely express their ideas. Over 75% of the U.S. population agrees that we should be able to access everything on the internet(WorldPublicOpinion.Org). Media censorship is often thought of as only an issue in smaller, totalitarian government states. The internet is a major form of media and by limiting or controlling internet access, what would make us any different than those governments that control the media? No government should have the right to limit or control internet access.

However, many people have come to the conclusion that by controlling or regulating the internet, we could protect people from terrorist propaganda and being negatively influenced. It is understandable that we would want to protect those we care about, but at what point do we go too far? A simple solution to parents worried about what their kids seeing would be just to block sites deemed negative. This solution allows people to still freely put whatever they want on the internet while parents can choose what the kids will see. Another common counter argument is Terrorists being able to use the internet to spread propaganda. In reality, only the smallest fraction of information posted can even be deemed propaganda and this information can easily be spread through other sources of media. We should not censor or limit internet access as there are simple solutions for common counterarguments.

Internet censorship or even outright banning of internet has become a source of great debate and controversy in recent years. We cannot allow this censorship of the internet as we would be losing our rights to free speech and free media. The internet should be a free place and no government should have the the right to control it. Free ideas and free thought have allowed the world to advance in ways never thought possible. By controlling or censoring the internet, we could lose one of the most important tools in making the world a better place.
Privacy Policy | Terms of Use
Sitemap | View Desktop Version
©2021 Debate.org. All rights reserved.