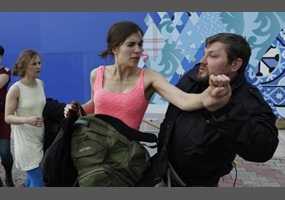 Does the recent Sochi attack on Pussy Riot band members taint your view of the Olympics?