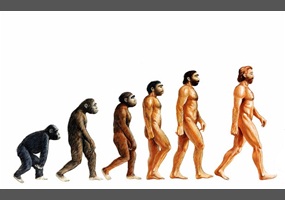 Has evolution of the human race effectively been disrupted by the advancement in technology and medicine?

Asked by: Dangeresque
Has evolution of the human race effectively been disrupted by the advancement in technology and medicine?
25% Say Yes
75% Say No
Leave a comment...
(Maximum 900 words)
SNP1 says2014-02-23T22:50:14.187
Report Post
This is not a clear yes or clear no answer. With technology we have gotten rid of survival of the fittest, but we also have a new type of evolution. People pick their partners based off of appearance/personality now. Personality has nothing to do with evolution, but looks do. Right now people like others with little to no hair, but with technology people can temporarily cut their hair extremely short. The extremely hairy people might not breed as much, making it so eventually we lose the genes for really long hair. Then again, we might also make a piece of technology that will make cutting the hair EXTREMELY fast and easy, making this not be a problem either. It is now survival of the popular, not survival of the fittest. We might evolve very slowly, but we also might make technology to compensate. We probably will not completely stop evolving, but it probably will take a LOT longer to evolve than it does naturally.
Privacy Policy | Terms of Use
Sitemap | View Desktop Version
©2021 Debate.org. All rights reserved.