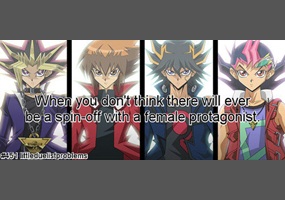 If all four Yu-Gi-Oh! protagonists (original, GX, 5DS, and Zexal) were female, would that affect the plot and would you want a female protagonist?

Asked by: PeriodicPatriot
Games, Video game
If all four Yu-Gi-Oh! protagonists (original, GX, 5DS, and Zexal) were female, would that affect the plot and would you want a female protagonist?
50% Say Yes
50% Say No
Leave a comment...
(Maximum 900 words)
KassandraStark says2016-02-22T15:55:00.317
Report Post
Wow, interesting how extremely sexist the two yes comments from woman are (well, at least they say they are). "I deal with girls every day, so I don't want to deal with them outside highschool". That sounds like generalizing woman to the top, which sounds like selfhatred. Woman are as diverse as man, saying that a female would wreck the show is the same as saying that a black would wreck a show or someone with glasses. It's discrimination, nothing less.

Regarding HL0400
"if Jaden were a female, she wouldn't eat as rapidly as the guy Jaden"
Woman can eat as same as rapidly as guys, especially if they are fictious.

"No I am not sexist for I am a female but still do I believe that the male should be a main protagonist in this anime."
Of course you're sexist if you think the gender is so important, that a female can't be a main protagonist. It doesn't matter if you're female, if you can't stand a female and think less of females, you're sexist.
Privacy Policy | Terms of Use
Sitemap | View Desktop Version
©2020 Debate.org. All rights reserved.