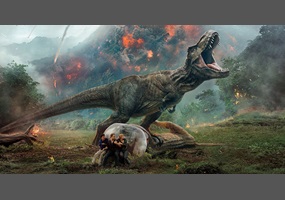 In Jurassic World: Fallen Kingdom, should they have allowed the dinosaurs to die?