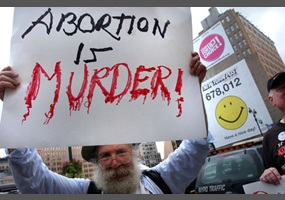 abortion, Health, Philadelphia
Is abortion wrong?
57% Say Yes
43% Say No
Load More Arguments
Leave a comment...
(Maximum 900 words)
rruthbj says2013-04-28T04:57:27.203
Report Post
I think all profetus people should volunteer to carry the fetus of their choice donated by someone who wants to have an abortion. Then they can carry it, have it, support it and then it would be their choice. Especially men profeti. If man can go to the moon, then man should carry a fetus. Maybe an implant in their stomach with a C section to take the baby out. You people who want to make decisions for a world of people should either put up or shut up. Right now you are like window peepers in other people's lives. With your horrible expletives just a masturbation of angry minds and mouths.
Anonymous says2013-05-20T14:41:27.240
Report Post
Its alarming how many people don't have sentiments about the innate preciousness of the birth of a human being. A precious precious spiritual entity. Nothing justifies the abortion pandemic. Its just pure evil. In the future, people will just refere to it as the Giant Holocaust and compare the people here who argued for it, with common Nazis. People who just didn't know better, and were possessed by self-righteousness about the glory of killing the defenseless, thinking it means they are strong or self-sufficient characters.
Anonymous says2013-06-08T18:44:38.557
Report Post
I wish Anti-choicers would just stop going on about putting a baby up for adoption, it's not a magic panacea that solves all the world's problems and not an automatic happy ending for the child either.
Shadowguynick says2013-07-02T22:56:34.393
Report Post
As cruel as it to kill an unborn child, it is even more cruel to let it lead a life of sadness and disappointment if they are born to terrible parents, or if they are born to a terrible situation. Teenage pregnancy is sad, but not for the mother or father. They are idiots who will cause a rough life for their child. I feel so bad about this. It would be great if we could live in a world where no such stupid decisions or stupid people existed. I personally know a pair of twins who were born by teenage parents. Their dad left them, and they lead a rough life. Now they are teenagers themselves, and report to have sex frequently. At 14 YEARS OLD. They frequently get in trouble with the cops, and one had tried to stab someone. This may not be the case with all, and I am not going to give any facts or statistics. But maybe my story will shed some light on some terrible happenings in the world.
jzonda415 says2013-08-21T15:49:19.763
Report Post
Arguing in the opinion section as I discovered is boring (Compared to debates and forms).
Nataliella says2013-08-25T17:01:09.487
Report Post
Notice how the majority of people saying "Yes" are Anonymous.
Jayleigh says2013-10-28T23:18:01.980
Report Post
This is very hard question to answer. My opinion is that it is wrong to abort but than again what if you were raped? Honestly I think it depends on the situation. If you were raped or anything like that I say you have the right to abort but if you were playing around and accidently got pregnant than you have to carry that out and learn your lesson.
DatAzian says2013-12-20T16:11:57.280
Report Post
94% of women say they regret their abortion. If it feels wrong, it probably is.
Sagey says2014-02-11T23:58:43.407
Report Post
If a woman goes to an abortion clinic, they will do their best to talk her out of having the abortion, because they really want to make sure that the woman is aware of all the problems and issues associated with her decision before going ahead with it. Last statistics I sighted stated that they have over 80% success rate at having women decide to keep the baby. In that 20% that do go ahead with the abortion there are those who cannot carry or keep the baby due to medical reasons.
JonHouser says2017-02-15T20:15:28.460
Report Post
@rruthbj - If I could carry a child that someone wanted to abort, I would. But that is not possible, so the only thing I can do is everything I can to protect his life. People cry all about incest, or rape, or the life of the mother, but the vast majority of abortions are done by healthy mothers who don't want to take responsibility for the results of their own actions. If a woman is going to have sex (protected or unprotected), then she should be held to account for the results of that action. She should not be allowed to "sweep it under the rug" by murdering the life that is within her. I am not letting the father off the hook either. He should be just as responsible for the child as the mother is, but we are talking here about the mother's "right" to her body. The child is not part of her body, because all of her body must have the same DNA and the same blood type. The child does not have the same DNA and usually has a different blood type. That being the case, she has no right whatsoever to harm the life that she participated in creating.
Privacy Policy | Terms of Use
Sitemap | View Desktop Version
©2021 Debate.org. All rights reserved.