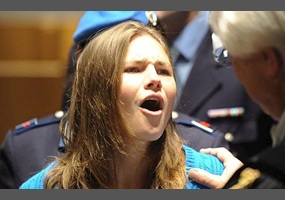 Amanda Knox, Italy, United States
Is Amanda Knox guilty?
70% Say Yes
30% Say No
Load More Arguments
Leave a comment...
(Maximum 900 words)
Anonymous says2013-04-30T04:21:42.057
Report Post
There is quite a lot of evidence, actually. There is a reason why the Hellman report has been annulled. Try reading some court reports rinstead of relying on Amanda Knox's PR nonsense.
Anonymous says2013-05-01T15:18:20.083
Report Post
Did anyone else notice in the interview with Diane Sawyer Amanda Knox shook her head yes while saying no to the questions “Did you kill Meridith Kurcher” and Where you there that night”……She's guilty
Anonymous says2013-05-03T04:55:06.543
Report Post
There's a lot of evidence, starting with the fact that AK's boyfriend was heavily into drugs and knives, and that a drop of the victim's blood was found in Filomena's room with AK's DNA in it. Also AK's footprints revealed by the luminol...
Anonymous says2013-05-03T08:07:11.620
Report Post
Yeah, I noticed her nodding YES when asked if she was there, and then when asked if she had anything she was hiding she said no. Then paused -- and as if more thoughts were coming to her -- forming into words about to come out -- and she moved her face as if keeping herslelf from saying them -- and then said with self controll - I wasn't there.
Anonymous says2013-05-26T01:59:36.260
Report Post
There is so much evidence against her.Also .There is an old saying "the camera never lies" look at all the photos that show her looking evil...You cant just say this is a trick of the light! Inocent people dont look like this!
Anonymous says2013-07-02T21:06:53.750
Report Post
Amanda Knox is a fox! Who ever is the true GOD in this world will KILL Amanda Knox as she KILLED Meredith Kercher. ONLY Amanda Knox was involved in killing of Meredith Kercher. She is Guilty! Why DON'T we Americans see this in her body language and in her eyes. We try to put blame on everybody else but NOT on Amanda Knox? Why? Wake up Americans...Right now, she is living a fake life. Remember, "whatever goes around will come around."
Anonymous says2013-09-23T22:58:52.300
Report Post
She's just so fake in her latest round of interviews, as the Italian courts ready to retry her. She's barely coherent; everything sounds like she read it from a bad self-help guide. I really don't think she's all there, and I do think she - probably a sociopath - can compartmentalise things very well. Those photos of her laughing in the lingerie store in the day after Meredith Kercher's body was discovered? Something's wrong with this woman. Hey, the Italian system isn't perfect and they messed up the crime-scene evidence, but all the facts and demeanours and behaviours (note that in common law systems such as the US and UK, demeanour CAN be considered evidence) added up...She's guilty and I pray for the dignified and collected Kercher family.
sodoff says2014-01-30T21:48:22.300
Report Post
http://m.bbc.co.uk/news/world-europe-25941999
Just declared guilty yet again by Italian court!
kan621ash says2014-01-31T08:37:16.233
Report Post
She is guilty if she was not guilty why would she blame it on her employer came on man any one with comenn sense will find her guilty over and over and i have been thru trail befor !! If u r innocent you dont change your story!! Put your self in her place if u did not do any thing your story will be stright not like hers !!!!!! She is guilty i bet my house and all my property on it !!!!
dfali02 says2014-02-01T02:08:29.880
Report Post
She is guilty. Send her back to Italy, she makes the US look worse. We do not need people like her in our country. Poor beautiful young Meredith killed due to jealousy and envy.
Bret_Z1986 says2014-02-09T08:55:54.287
Report Post
Jealousy and envy? Did you happen to notice Knox was hot and Kercher wasn't? That's idiotic.
lodgey37 says2014-02-17T19:45:30.117
Report Post
Idiots who think she s guilty can t you read
mickuk says2014-02-19T21:34:21.337
Report Post
Brett_z...Your blind
mickuk says2014-02-19T21:36:26.637
Report Post
Guilty
mickuk says2014-02-19T21:38:40.487
Report Post
Guilty of involvement at least!!!
mickuk says2014-02-19T21:40:16.517
Report Post
In my opinion
Snowball says2014-02-20T03:09:43.693
Report Post
Guilty - truejustice.Org
tempusr says2014-03-02T21:51:07.337
Report Post
Ton of evidence to show guilt
obrien says2015-03-02T23:40:23.910
Report Post
Occam's Razor is a concept that should be employed when starting analyze this case. Those principles would have been beneficial to he prosecutor, Guiliano Mignini -- a man (1) convicted of abusing his office, (2) obsessed by the cult-driven theories of human/sexual sacrifice for decades resulting in numerous floundering investigation, and (3) with a history of denying accused the right to legal counsel. It's takes a serious of mental gymnastics (read, "assumptions") to conclude that two roommates that met about six weeks before a murder had established a deadly relationship because they annoyed one another as roommates, such that Knox would recruit her boyfriend of less than a month to recruit a person (already known as a knife-wielding burglar) to torture Ms. Kercher as punishment for some perceived puritanical belief system after smoking a couple of joints. Then, the State would use a confession taken in another language to help convict her, all the while the drifter with a history of break-ins (while possessing a knife) had confessed to the crime without implicating two teenagers. Amanda Knox might be a horrible person for implicating her boss. But, she would never have been in that position has she been provided counsel. She might be jealous. She might be weird. But these traits, if true, and any dishonesty doesn't create physical evidence against her. The physical evidence has been more than called into question, including the propriety of the testing and collection.

Let's use the same system of logic to demonstrate why the theory of the case is so absurd. Assume that I believe aliens are responsible for most murders (my analogy for the Monster of Florence). I then accuse you of committing murder. You blame another person who has a verifiable alibi. And, another third person then confesses to the crime (albeit, without acknowledging that they are an alien). I have not demonstrated that, because somebody was killed and you blamed somebody else for the crime, that you committed the crime. I also have not demonstrated that you are an alien or that aliens exist. However, an entire trial was conducted based on the recycled and repeatedly debunked theory that the Monster of Florence was alive in two teenagers that had meet 30 years after this theory was first put forward.

I have also yet to hear any reasonable explanation as to how, at best, there was trace DNA evidence of Knox and Sollecito and substantial DNA evidence for Guede. Setting aside whether the DNA was contaminated or not, do we not have to assume under any scenario that somehow these three took the time and effort to (nearly) eradicate all DNA evidence for Knox and Sollecito, despite all allegedly participating in violent death of Ms. Kercher, but apparently decide to leave the DNA evidence for Guede? Or, was the murder/sacrifice agreement not so detailed as to address the partial clean-up of evidence? Apparently, the DNA evidence of Guede found inside Kercher was, in the opinion of the latest judicial opinion, inconsistent with the theory that Kercher's death was caused by Guede, a known knife-wielding burglar.

The opinion vacating the acquittal is, at best troubling. If the roommate-orgy theory fails, the court concludes that, well, "shoot," we may never really have -- or apparently need -- any motive to implicate Knox or Sollecito. Who here has every been irritate at a noisy or messy roommate? Did you decide to sacrifice them following a orgy gone awry because you argued over noise or a dirty bathroom? I also like the conclusion that, because a separate court did not convict Guede of theft (despite agreeing to an expedited trial of Kercher's murder) that Knox must have stolen the money because Knox had to pay rent -- not that she had no way to pay rent -- just that rent was paid using money. Of course, then too, Guede was not apprehended for some time, allowing a burglar plenty of time to ditch credit cards and cash.