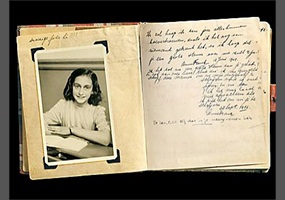 Is an organized group defacing copies of Anne Frank’s diary in Japan?