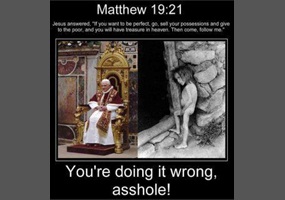 Asked by: Sagey
God
Is Atheism God's fault?
22% Say Yes
78% Say No
Leave a comment...
(Maximum 900 words)
Sagey says2014-02-11T11:46:12.747
Report Post
Some think I'm Anti-Theist.
Though they are not quite right.
I appreciate Religions groups that are trying to be Intellectually honest about their belief.
I hold the Dalai Lama in high respect because he is trying to be intellectually honest about his Buddhism.
One such Christian group is "The New Covenant Group".
I'm a massive fan of Dr. Michael Jones.
A Christian who strives to be intellectually honest about his Christianity.
It's a pity that such intellectual honesty is rare in Christians.
Here's a "New Covenant Group" video with PZ Myers as a guest speaker on the Resurrection.
Https://www.Youtube.Com/watch?V=BLusSLLywyA
Dr. Michael Jones is a very open minded Christian.
This is also rare!
TrustmeImlying says2014-02-11T16:36:56.400
Report Post
Wow, this is an extremely loaded question, I assume this is sort of a hypothetical?
Sagey says2014-02-11T22:19:06.957
Report Post
Yes Trustme, It was a Hypothetical that suppose that God actually existed and the world is turning towards Atheism in the same way that it currently appears to be. Atheism is growing world-wide. So if this is so, then what has the God done wrong to create this situation.
I'm just applying basic reason to the growth of Atheism in a world that actually has a God.

Though both you and I know, that the existence of God is an impossibility.
So it has to be a Hypothetical.
TrustmeImlying says2014-02-11T22:47:34.863
Report Post
Very interesting. This might not be the forum to discuss this, but you seem very forward with your opinions on these matters. If I might ask, what is the purpose of these? Is it simply to inspire debate and conversation or is it to try and bring awareness and maybe change some minds?
Sagey says2014-02-16T14:15:56.010
Report Post
My entire purpose here is to generate different modes of Thinking.
Nothing else.
If it gets people to make rational, critical investigations into the topics I select, it has done it's job.
Though I'm still too often presented by the same tired old excuses for not investigating the topics rationally.
They throw up the lines that demonstrate their sheer Ignorance like "The Mind Of God is unfathomable and thus we have No Right To Question God."
As soon as I receive such responses, I cannot help but consider those that give that response as Irrational Idiots, incapable of Rational Thought, since they are deliberately making an excuse to avoid Thinking Rationally.
Avoid thinking rationally enough and like any part of their neurological system, they become incapable of Rational Thought.
It's like any part of our system, it must be exercised regularly to stay functional.
Sagey says2014-02-16T14:29:23.090
Report Post
BTW: Trustme: So far there are 3 posters here who seem to have serious trouble trying to think Rationally.
Those ones on the right who I haven't given the thumbs up to are the ones I mean.
Though there can also be those on the Left who make their choice Irrationally, I cannot really judge by Yes or No choices alone, since there are Rational reasons to choose "Yes" and there are also Rational reasons for choosing "No".
Those I've given a "Like" to are demonstrating some degree of Rationality, those without a "Like" from moi, have definitely not practiced Rational Thinking for a very long time and it shows.
Maybe they have become incapable of Rational Thought?????
TrustmeImlying says2014-02-16T23:05:23.407
Report Post
I ask because although you're rightfully straightforward, I've noticed that sometimes you can be pretty aggressive in your statements. If you were trying to change anyone's mind, that might work against you. People put their defenses up and dig their ditches deeper if they suspect you're attacking them. Don't get me wrong, I get the frustration of arguing against the same exact things over and over:

Young Earth (ugh...)
The first cause argument
The shifting burden of proof
The transcendental argument
Arguments of/from coercion, ignorance, authority, probability, and design
Pascals Wager
Arguments of morality
"You're taking it out of context/too literally"
"You're being close-minded
And my personal favorites
"Why do you love spreading hate/lies/anger"
"Why do you hate me/God/peace"

Of course, you do whatever works, but I invite you to try and have a softer touch. It might just change someones mind.

Whatever the case may be, I'm sure we'll bump into each other very soon! See ya later, man.
Privacy Policy | Terms of Use
Sitemap | View Desktop Version
©2020 Debate.org. All rights reserved.