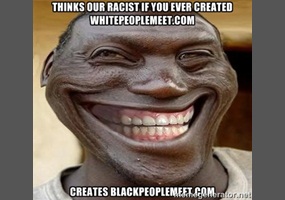 Paula Deen, Al Sharpton, United States
Is Black People Meet racist?
70% Say Yes
30% Say No
Load More Arguments
Leave a comment...
(Maximum 900 words)
Rere2737 says2018-05-17T06:48:08.973
Report Post
It's racist because a site called "meet white people" the black community would be all over it complaining IT's racist. Can there be a tv show called "white love" on OWN? No. Black people would say it's racist. Yet there is a show called "black love". Can there be a tv channel "WET"? White entertainment television? No Yet there's BET black entertainment television. Can we have a magazine called "Ivory"? No. Black people would say it's racist. Yet there's "Ebony". There's black awards, black this black that. They say that's ok. But if there aren't any black people nominated for an academy award watch out!!! Black people complaint racism again. But there can be ANYTHING for BLACK people only. They want to be equal, but keep pointing out the fact that they're different.

Ive read about Vietnam: 'they keep sending us Black people there to get killed.' Well, the majority of people killed in Vietnam were WHITE.

I hope that someday this segregation would end and Dr. King's dream would come true.

And we need to get these white supremacists out of here. If they want America to be the original race, then they need to go back to England because the original people are Native American!!! Morons.