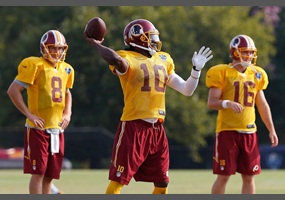 Is Colt McCoy a better quarterback than Robert Griffin III?