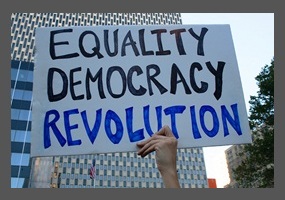 Is equality the goal of a democratic society?


Many may think that G-d provides for theocracy, negating democracy, however it is G-d that provides for the sanctity of each individual which creates an entitlement to equality and freedom. This is the precurser to and foundation of true democracy.

Democracy is neither a business nor pragmatic or a science. It is more of an art that helps men to get together and live in peace and happiness with equality. All men are not born equal, it is democracies role to make them equal.

This is a goal, is not an absolute, but is a continual work in progress. True democracy implies equality not as a given but as a goal of equal and fair distribution based on the allocation of labor and rewards.

This is the goal we must all work towards, using democracy as our tool, in furtherance of G-d given individual sanctity as our right!