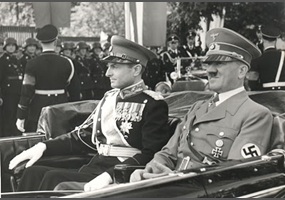 Is Fascism left-wing (yes) or right-wing (no)?

Asked by: Marshall-Abarca
Politics
Is Fascism left-wing (yes) or right-wing (no)?
78% Say Yes
22% Say No
Load More Arguments
Leave a comment...
(Maximum 900 words)
1dustpelt says2013-08-20T20:03:08.470
Report Post
It's neither. Left wing and right wing has never been good at describing anything anyways.
Marshall-Abarca says2013-08-20T20:55:12.463
Report Post
Left-wing and right-wing are the best way to describe these things though. The only other option I've seen is the Nolan chart, however the fatal flaw in that one is that it doesn't take into account that Conservatives and Liberals have many different forms, the linear chart however does take this into account. I've seen political webs before as a way of describing things but they are overly complex, the linear model does things in much more simplistic manner.
Repukesaretheworst says2017-12-08T16:28:24.233
Report Post
Fascism is 100% Reich-wing, BY DEFINITION, you fucking morons. Only conservatives would paint the left-wing as the very thing they themselves are: fascists.
billsands says2018-10-16T01:33:54.503
Report Post
It further demonstrates Dinesh’s claim intentionally dishonest at worst or intellectually lazy at best. This is because Dinesh quotes from “The Doctrine of Fascism” in his video. Either he read the essay and intentionally ignored the quotes I have given because they don’t fit his narrative or he didn’t read the essay. To add insult to injury, Giovanni further states in this essay that “Political doctrines pass; people remain. It is to be expected that this century may be that of authority, A century of the “Right, ” a Fascist century. ” You read that correctly. Not only does Dinesh D’Souza ignore that Gentile was critical of Marxian Socialism in a feeble attempt to connect Fascism to the left, He ignores that Gentile himself claimed that fascism is a political ideology of the Right.
pitman1 says2021-12-15T13:59:49.637
Report Post
Fascism historically has elements of both the left and right. However, Contextually today, If there is an answer, Then logically fascism must be considered leftist. The controversy arises over which major element of fascism one wishes to emphasize: the nationalism that was associated with Nazi Germany and Mussolini, Or the power structure in which a government authority co-opts excessive power over its subjects.

Today when someone is accused of being fascist, The emphasis by both the left and the right is on the power structure. For example, Trump was accused of being a fascist because of the left's perception that he was attempting to co-opt excessive power. Period. Same goes for the right when it condemns Biden's attempts to ignore the Constitution in his Exec Orders, And then the Dems for subsequently threatening to stack SCOTUS in order to force its own policies against the existing democratic structures. Meanwhile, When the FAR left pretends Trump's nationalistic impulses (e. G. , 'America First') made him fascist, They are employing the non-sequitor that nationalism means (or leads to) excessive authority -- but nationalism itself has no implication of excessive centralized authority, And it is not fundamental to modern claims of fascism, Where both the left and right agree excessive authority is its fundamental, Necessary, And sufficient undesireable component.
Privacy Policy | Terms of Use
Sitemap | View Desktop Version
©2022 Debate.org. All rights reserved.