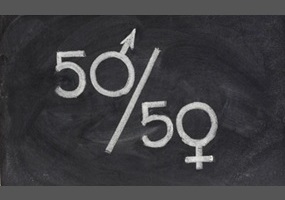 Psychology, gender
Is gender equality possible?
49% Say Yes
51% Say No
Load More Arguments
Leave a comment...
(Maximum 900 words)
Anonymous says2013-03-17T20:10:53.733
Report Post
the following is a letter i wrote to starbucks after realizing, through a seldom-seen all-man staff, that the vast majority of their coffee-shops are sexist to have starbucks represented by all-female staffs


today, march 3rd, i was driving north from pittsburgh and i got off of the highway to stop at the gas station right off of the wexford exit of i-79. after i got gas, i realized that there was a starbucks coffee shop not 200 feet away from me. i was returning from the pittsburgh rivers casino, where i had taken out $100 and was betting small bets on various slot machines - i had gotten up to $190 early-on...but eventually went down to $0. i hate to admit that i would've taken another $100 from the atm...i am happy that i got a "non-sufficient funds" message when i tried to withdraw from my spending account at bank of america. tlc said "don't go chasing waterfalls," and djt says "don't go chasing losses". though djt always chases losses. it's so much easier than chasing the perfect specimen of manhood who has no interest in being associated with me (though it's much more costly).


anyway, i must say that i had thought of coffee shops (especially starbucks) as being full of politically-correct (liberal) bs - how surprised i was to see that the three coffee-clerks working at starbucks were all men. i, for one, am getting sick and tired of all of the overcompensations that society gives to the lesser gender in an effort to make them appear as man's equal - overcompensations ranging from lesser military requirements to gender-based sports teams to high-heeled shoes to shoulderpads. wherever i go, i see females wanting to be seen as man's equal...when these very overcompensations just label them as a bunch of masculine wannabees.


again, it has made my day that this starbucks is the first business i have seen in a while with a staff of all men. i'm not saying that i haven't seen a staff made up entirely of the lesser gender at starbucks stores, but it was definitely a mark of diversity to see an all-man staff in a society where all-female staffs are commonplace.


i was actually wearing a t-shirt that i had designed online, which highlighted the "lesser" aspect of the lesser gender (two stick figures, one blue and one red, with arrows to signify broadening shoulders versus widening hips...with a bigger barbell next to the blue stick- figure...with the words "bodyheight, bodyweight, bodystrength" above and "all this AND a superior sex drive" below. it was a t-shirt advertising one of my websites (www.thelessergender.com), and it was kind of ironic that members of the lesser gender were nowhere to be found working at starbucks today. i must admit that if staffs consisting entirely of females were nowhere to be found (including at starbucks stores) then i don't think i'd have reason to mock females with my shirts and my websites. however, all-wombn staffs are seen a lot more than all-man staffs, and it is for this reason that i must commend the starbucks corporation for not always contributing to the attitudes of female chauvinism which are omnipresent in today's society. we are a society of chauvinists wanting to placate the lesser gender with over-representations in the workforce and even in the military (which actually compromises our national security like competitors in the "special olympics" would compromise the u..s. olympic team if a quota existed for "equal representation" of the lesser olympians). i remember as a little boy, hearing dolly parton or jane fonda or lily tomlin call dabney coleman a "male chauvinist pig," and though the words "female chauvinist pig" may be unheard of...this is what members of society have become as a result of the placation given to the lesser gender (ie, gender-based quotas in everything from college admissions to a town's police force).


i must commend starbucks for not contributing to the over-representation of the lesser gender, which seems to exist as a means to further the politically-correct notion of gender-equality...even as competitions are gender-based and therefore prevent the little gender from competing against the strong gender. from military requirements to college sports teams to poker nights at casinos...heck, even to the olympics...it's an accepted fact that one gender would serve as a "handicap" while competing alongside of another gender, and yet society is buying into the "anything a man can do" propaganda of feminism.


completely unrelated to my experience at starbucks today, i must mention the fact that i just want to crash into any car in front of me if there doesn't appear to be anyone sitting in the driver's seat (while there is someone clearly visible in the passenger's seat because the passenger is big enough to tower over the top of the seat). i don't want to know the kind of values which are going to be instilled in a child who has grown up regarding a member of the milk-spouting, egg-bleeding, shorter, weaker, insufficient, lesser gender as "leader" or "head of the family". this propaganda of "female superiority" is a placebo given to members of the lesser gender as a means to provide them with some unwarranted sense of esteem as a method of psychologically overcoming their inferior states of physical being though means of mental delusion. this propaganda, however, will not provide an adequate level of defense against a slanty-eyed nation which harbors aspirations of world-domination and (therefore) practices infanticide of the gender which can do nothing more than fight like a girl.


i feel that if more stores (and coffee-shops) would take a cue from starbucks and quit having their professional identities represented by a bunch of milk-spouters and egg-bleeders, then the u.s.a would be properly equipped to regain their #1 status. i say this because society would not be exposed to politically-correct preservations of weakness-masking "pride," as they'd be exposed to reality and truths suggesting that 1) a woman simply cannot do anything a man can do (and has no business thinking that she can) - and 2) any male who is dumbfoundedly curious of masculinity has no sense of masculine gender-identity and therefore cannot be considered a man. the problem with america is compassion. there are too many people who feel it is noble to overlook someone's dysfunctional state of mind through praise and encouragement of it. this is wrong and this is why the u.s.a. is going downhill. everyone is too afraid of being labeled a bigot, so nobody dares to say that gender-changing surgeons should be replaced by mind-changing psychologists. nobody dares to take issue with mexicans in america, nobody dares to take issue with labeling as "strong" anyone who can't budge a 100-pound barbell. nobody dares to take issue with "men" who stare open-mouthed and wide-eyed at naked members of their own gender (and who therefore deny a realization of masculine esteem).


wrapping up, i will compliment starbucks for being the corporation responsible for the first all-man staff i have seen in a society filled with all-female staffs. there is nothing "greater" about a gender that's largely responsible for shorter people, lighter people, weaker people, and defenseless people who have been given a "violence against us" act as a means of protection. there should be nothing and nobody trying to justify the lesser gender as "greater," either through over-representation in the workplace or in the military or in positions of authority. sometimes even gay "men" want to start to Risk Affirming Patriarchal Endeavors, just to teach these wannabees a lesson.

Women = womb+men
Anonymous says2013-07-02T18:05:38.170
Report Post
In my opinion it can be possible, but only if it means that they get paid by what they do best. For example men are known to be stronger because of the way they are built, while women are known to be care givers. So I would agree that when it comes to jobs such as fire-fighters, construction workers, or similar jobs, men should get the higher pay. But when it comes to child care, nurses, vets, or other similar jobs, women should get payed more. It is an unfair world, but unless we learn that we are not equal and that we each have better qualities than the other then it will be fair.
Privacy Policy | Terms of Use
Sitemap | View Desktop Version
©2021 Debate.org. All rights reserved.