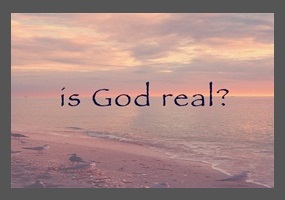 God
Is God real?
45% Say Yes
55% Say No
Load More Arguments
Leave a comment...
(Maximum 900 words)
Josiah says2013-07-24T15:38:06.803
Report Post
I am very sure that God is real. The main reason why is this: our human body uses chemical concentration gradients to send nerve impulses. Evolution could not have done that. I encourage both side of this argument to do more than just try to prove their side right, but be open to all arguments as a respectable opinion.
Anonymous says2013-09-21T23:23:03.707
Report Post
The existence of God which has predetermined your eternal destiny in Heaven or Hell before you even know it yourself is the epitome of the anti to all truly American values. When your fate is already somehow predetermined by a supernatural deity, there is no freedom of thought, freedom of action, freedom to do what you believe you should do.
Anonymous says2013-09-24T08:37:15.973
Report Post
Man people question whether God is real or unreal. Being the Christian I am, I believe he is. But many non-believers don't want to accept the fact that there is a higher power. Some may say "If God is real, then why does he let good people die?" My answer, "All things happen for a reason. And how can you expect God to save someone who has never prayed to him nor even gave him the time of day? God will do his will, whether we like it or not. " You may wonder why so many things go wrong for Christians, well because there is a Devil in hell, he strives to make sure we sin and do wrong, so we can go to hell or die. The devil hates everyone, but mostly Christians who worship God and are ensured eternal life. We are targeted, though we go through many trials, as have I, I stay strong and remain happy and continue having faith. Because God won't fail me. He's spoken to me, gave me dreams and told me I was to be a missionary and spread the gospel. I don't judge others, I choose to love and forgive while following by the bible and God's word. Jesus died for my sins, and I love him for that. And when I enter heaven, I will walkthe streets of gold and have everlasting life with my Father in heaven. I will never change my thoughts or beliefs. So don't judge me, and see me as I am. A Christian who loves the one and only God. ^-^
AceWild says2013-11-13T14:08:25.167
Report Post
God was invented to explain mystery. God is always invented to explain those things that you do not understand. Now, when you finally discover how something works, you get some laws which you're taking away from God; you don't need him anymore. But you need him for the other mysteries. So therefore you leave him to create the universe because we haven't figured that out yet; you need him for understanding those things which you don't believe the laws will explain, such as consciousness, or why you only live to a certain length of time- life and death- stuff like that. God is always associated with those things that you do not understand.
Im_Intelligent says2018-02-27T17:28:23.057
Report Post
Creationism, because reading one book is easier then alot of hard ones.
N7733 says2018-08-13T21:19:41.753
Report Post
I am positive God is real. Look at the way the universe runs. If the earth was closer to the sun, It would burn up. Like wise if it was farther away, It would freeze. Also, The way the universe is expanding points toward a sudden, Explosive beginning. How could the complexity of the universe, The precise planetary orbits come around by random chance.
Vazboy2002 says2018-11-24T05:56:27.277
Report Post
If God exists then why does the Christian's have to push others to join them according to the end times he who believes in God shall become kings of worlds and if that is the case wouldn't it be less kings the more you have and also kings of what? God according to christianity only made us as intelligent beings but if that is the case why are we trying to be kings what will we rule over. . . I am pretty sure we rule over everything on our planet that has a intelligent mind other than dolphins which Also goes against that since they are more intelligent using 15% of their brain while we use 12% at most last I heard.
Privacy Policy | Terms of Use
Sitemap | View Desktop Version
©2020 Debate.org. All rights reserved.