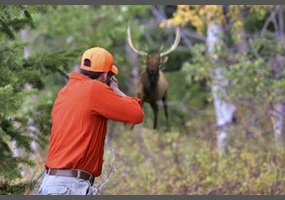 Is hunting a good thing?

Asked by: Mherzer
Recreation, Namibia
Is hunting a good thing?
79% Say Yes
21% Say No
Load More Arguments
Leave a comment...
(Maximum 900 words)
sharpshot21 says2015-05-04T18:37:15.957
Report Post
For me my favorite sport is hunting. That is my favorite sport because you get to be outside and see natur. I also like to be outside because you get two breathe fresh air. It is also a needed thing if we did not have hunting animal populations would go sky rocketing. It would kill our environment just as quickly as big factories and bom testing does. But hunting is not safe and can lead two bad things like for some animals it can make them extinct, or put them on the endangered species list.
Ebear01wolf says2015-05-04T19:06:23.310
Report Post
We keep the animal population in order and they taste really good.
Privacy Policy | Terms of Use
Sitemap | View Desktop Version
©2021 Debate.org. All rights reserved.