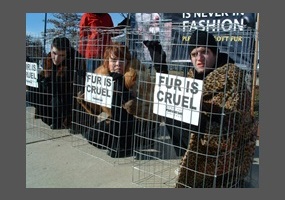 Is it unethical to wear fur?

Here's what I think should happen with this fur business:

- fur is fine to wear, end of story
- the main issue I feel is the animal of choice, and the method of getting the fur
- the list of animals that we can get fur from should be reduced. Not everything with fur should be taken. How about only animals that will die cuz of disease, food, or etc. NOT die because of its skin!
- why does the animal need to be alive for skinning?? I saw some live animal skinning vids, it is awful! Seriously kill the animal humanely first... Not so hard right?

Peopl need to learn to listen and hear both sides of the debate lol. In this short comment I just ended the debate in a way to win for BOTH sides.

Good luck!
fractaldreams says2013-07-04T11:56:00.580
Report Post
Ok, if you happen to be an Eskimo or some member of a nomadic tribe where your way of life is very simple and in harmony with your natural environment, then that's different. The relationship people who lead such lifestyles have with the animals they hunt (which includes a deep respect) is a million miles away from what the rest of us with our computer, supermarkets and shopping malls will ever experience.
Privacy Policy | Terms of Use
Sitemap | View Desktop Version
©2020 Debate.org. All rights reserved.