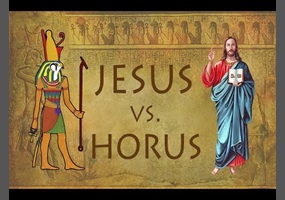 Is Jesus a myth copied from Egyptian god Horus?

Is Jesus a myth copied from Egyptian god Horus?
33% Say Yes
67% Say No
Leave a comment...
(Maximum 900 words)
Oblique9043 says2019-11-21T04:39:23.527
Report Post
Jesus's story is a well plagiarized story made up of several older myths from Sumeria and Egypt. Horus just being one of them. Inanna and Dumizid/Tammuz being the other main source. Inanna died and got resurrected 3 days later. Dumizid was a Shepherd who was called Damu which means "my son". He was betrayed by a friend when demons were looking for him to drag him to the underworld to take Inannas place. Inanna's animals are the dove and the lion, Just like Jesus. In fact, The dove has ALWAYS been a symbol of the mother goddesses thus making the Holy Spirit female. The Father, Son and MOTHER. How could God exist without a feminine component when love comes from your mother? Thats why you have to be "born again" of the MOTHER spirit which was separated from us when Yahweh took Eve out of Adam and kicked us out of the Garden of Eden. Mother Nature. Thus creating neolithic cultures out of hunter/gatherers which is what has lead us to destroying our planet and ourselves. We are disconnected from our Mother, And that has resulted in this masculine aggressive war like man. Thats why El comes from a word that means Ram in Hebrew and Jesus is the slain Lamb of God, Lambs are baby rams and Aries/Mars is the Ram headed god of war. Lord of Hosts literally means God of War. Moses literally calls his god a "man of war". Yahweh is Aries the blood thirsty war god which is why he loves blood sacrifices so much and describes the smell of burning fles h as a "pleasing aroma".
Privacy Policy | Terms of Use
Sitemap | View Desktop Version
©2020 Debate.org. All rights reserved.