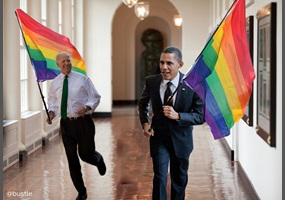 Is Joe Biden marrying two gay officals at the white house a sign of a more progressive future?