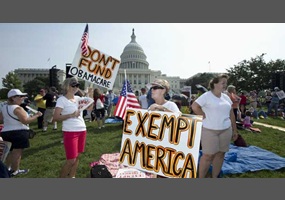 obamacare, Holidays, Oklahoma, Obama, United States
Is Obamacare unconstitutional?
61% Say Yes
39% Say No
Load More Arguments
Leave a comment...
(Maximum 900 words)
GWL-CPA says2013-09-27T19:41:15.093
Report Post
You folks have no clue what you are talking about and you must be unfamiliar with how Federal Legislation is passed by Congress in the USA.

This law can only be repealed by a two-thirds vote in both the House of Representatives and the Senate, which will most likely never happen.

The Supreme Court rejected the “penalty” argument on June 28, 2013.

"The payment is not so high that there is really no choice but to buy health insurance; the payment is not limited to willful violations, as penalties for unlawful acts often are; and the payment is collected solely by the (Internal Revenue Service) through the normal means of taxation,"
http://www.Cnn.Com/2012/07/05/politics/scotus-health-care-tax/index.Html

And, depending on your taxable income, many will not have to pay anything because they don’t have a health care policy.

And, you are not being forced to buy insurance; but, you are being accessed a tax penalty if you don’t; there is a difference.

Although many young people believe that they will never get sick and should not have to purchase health insurance, many young people do get sick or injured and end up costing the taxpayers billions annually because they end up in the emergency room.

This is similar to auto insurance that is mandatory in all states.

Some people, very few, will never have an auto accident. The average rate of auto accidents is 1 in every 15 years, i.E. Most people will have 1 auto accident every 15 years. So, you are being forced to have automobile coverage in 14 of the 15 years in which you will not have an accident, on average. Even if you don’t own an automobile and only take public transportation, part of the fee you pay for public transportation is to cover the insurance costs. So, you are being forced to pay for insurance, one way or the other.

The states’ penalties for not having auto insurance are much stiffer than the Federal Government’s for not having a health insurance policy, e.G., in most states you are required to prove you have insurance to register a vehicle. If you are convicted of driving without insurance you will have your license suspended, your vehicle registration will be revoked and you will get a ticket, e.G., in New York, that ticket will cost up to $1,500 and $750 to reinstate your license.

There is another reason auto insurance is mandatory for everyone. The insurance companies would have to charge huge premiums, if everyone was not required to buy insurance. Because, the insurance pool is large and includes everyone with a vehicle, the premium costs are much lower. This is the same thing as the ACA – Affordable Care Act. The bigger the health insurance pool, the lower the premiums.

Now I will address your other comments.

The law was passed by Congress and signed by President Obama in March 2010 was to:

1. Eliminate the pre-existing condition clauses that health insurance companies have used to deny insurance or to charge exorbitant premiums.

2. Require insurance companies to spend 80% to 85% of customers’ premiums on actual care instead of lining their pockets with egregious profits and paying themselves huge salaries and bonuses far above all other industries in the USA.

3. Allow children to stay on their parents’ policies until the age of 26.

4. Allow tens of millions of people to get preventive care at no extra cost.

5. Eliminate caps on medical insurance policies that have resulted in many people being forced to file bankruptcy because the insurance companies had caps on what they had to pay.

6. Provide affordable insurance to everyone, not just the nonsense 10% number you have mentioned. For example, my wife’s employer charged $14,000 per year for family medical coverage.

7. Ensure you have good insurance if you lost your job and could not afford the cost of COBRA.

Please go to the follow site and read the 18 reasons, since you appear to be clueless.

"18 Reasons the Affordable Care Act Was the Greatest Achievement for the Middle Class Since Medicare"
http://www.Eclectablog.Com/2012/06/18-reasons-the-affordable-care-act-is-the-greatest-achievement-for-the-middle-class-since-medicare.Html

Where are you getting the nonsense that poor people will not be able to afford medical insurance policies even under the ACA?

This will save the taxpayers billions annually because they don’t have to pay for the emergency room visits made by these poor people, who will now be able to go to a their private doctors & clinics.
Privacy Policy | Terms of Use
Sitemap | View Desktop Version
©2021 Debate.org. All rights reserved.