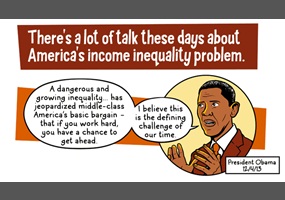 Is President Obama stirring class resentment when he speaks of income inequality?