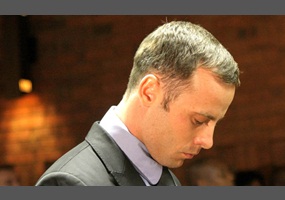 Is South African runner Oscar Pistorius telling the truth about his girlfriend's death?