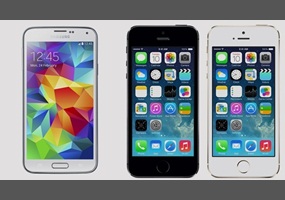 Is the Galaxy S5 with fingerprint scanner just a copy of the iPhone 5S?