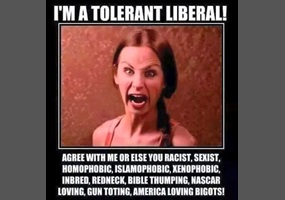 Is the left becoming more and more intolerant?

Asked by: Verita
Is the left becoming more and more intolerant?
75% Say Yes
25% Say No
Leave a comment...
(Maximum 900 words)
Arget says2016-12-26T23:05:41.993
Report Post
I find it hard to vote either way in this. The extreme ends of both sides have been getting more intolerant and vocal, but this has been an ongoing trend for some time and I don't believe that these extremists represent the majority of either side (though they may be gaining more political power than the more sane majority).

On the other hand this presidential campaign has been an absolute repudiation of everything the left has stood for; and it is hard to not associate those who voted in contrary to their morals in picking what they believed to be the lesser of two great evils, from those who would gleefully destroy and overturn everything you believe in. However even before getting to that point it was the unqualified, extortionist, bullying, racist, sexist, elitist Trump who secured the republican nomination over every other candidate.

Yes Trump's win is a repudiation of the left.
He didn't campaign that we had become to strict in political correctness (aka civil discourse and common courtesy), but that it should be thrown out entirely. So someone should be allowed to say the most vile things imaginable under free speech, and face no social consequences.

He didn't campaign on fixing regulation (which were originally intended to keep people safe and healthy, protect peoples rights, or maintain a fair and competitive economy) and increasing government efficiency. Instead he wants to throw out all those regulations and close large sections of the government.

He didn't campaign that we went to far in stopping discrimination (based off race, sex, religion, orientation, age, or any other factor), but instead said that discrimination is good and right (religious bans, mexicans are rapists, blacks thugs, and women are meant to be eye candy).

He separates people into winners (the rich, powerful, and prestigious) and losers (everyone else and Trump critics) while treating the losers as if they have no rights as a human being.

So in the face of this I can see that the left could become more intolerant because of trump. I however believe that the American people were fed a story of false equivalency, that trump would not be as corrupt or even more so than his opponent and that shaking up the system might be worth overlooking his detriments.

Trump has been playing the system and corruption since his first business deal when he got a political friend of his father to qualify his luxury housing under the tax breaks meant to subsidize low income housing. He has repeatedly not payed his contractors and workers. Those times he does pay it is often at a fraction of the amount with the other side threatened with no payment or less than offered after an expensive legal battle. He has repeatedly engaged in harassment against those who stand in the way of his plans be it tenants of a building he bought or a person whose home is where he wants to build a golf course.

Because of this I consider Trump to be as corrupt if not more so than Hillary Clinton. However with his refusal to sever his business ties, ignorance of ethics, bringing family business and members into important meetings, and filling his cabinet with big money interests I fear that the Trump administration will be filled with unconstrained corruption and greed. At least Clinton, if she was as corrupt as the non conspiracy theorists claimed, would restrain herself to maintain an illusion of morals and decency; however Trump will never see a need for such a pretense. The only shake up of the system is going to be to the benefit of the elite as none care one whit for the vast majority of people trump labels losers.
Privacy Policy | Terms of Use
Sitemap | View Desktop Version
©2022 Debate.org. All rights reserved.