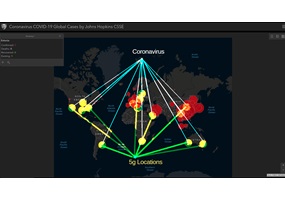 Is the recent proliferation of 5G the cause of the so-called 'COVID-19' outbreak?