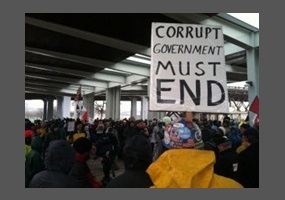 Is the U.S. government corrupt?

United States, Federal government of the United States
Read more: http://www.foxnews.com/politics/2013/01/15/s...
Is the U.S. government corrupt?
97% Say Yes
3% Say No
Load More Arguments
Leave a comment...
(Maximum 900 words)
Anonymous says2013-06-21T21:19:36.930
Report Post
Saying the government is corrupt would be historically accurate. There is actual documentation of this like the indian wars where presidents themselves ordered their lands to be taken or the mexican wars that we started to take the south-west. Much more greed is alsi cleverly concealed in the background which i wont go into detail about. One of my least favorites is the attempt to wipe out entire ethinic groups by taking indian children from their parents and forcing them into boarding schools, never to see their parents untill they are grown.
Debbie21 says2014-05-01T16:47:23.317
Report Post
I wish someone would DO something about this corruption. I have had people tell me (people I don't even know) that I am a target. I was fired from my job for no "good" reason. I was in jail twice; under the guise of being "employed" there while I was bullied and berated. I have hence been trying to meet people, but everywhere I go there are government reps who get in the way of my meeting any "normal" people. I am seeking friends.
Truthseeka says2014-07-27T00:28:32.133
Report Post
The elites must be held to account as should both sides of politics. Nothing will change even after a global economic collapse because they control the technology, satellites, drones, missiles, biological agents, food supply, etc. If we can destroy their means of control, we may have a chance, but they control so much more than you know. If you live near the usa, im afraid you are surrounded and will perish as is their plan to fulfill prophecy. The elites care not what happen to anybody, only their ambitions to control you and suppress your ideals of peace and love and free thought. The end result no matter how I analyze it leads to a very grim end and internal warfare where they watch us turn on each other for survival and religious beliefs indoctrinated. Doesn't help that human history is fabricated and what is fact is seen as insane. Mankinds true first step is evolving to a type 1 civilization. And we are not looking to be gaining any ground as of yet.
Privacy Policy | Terms of Use
Sitemap | View Desktop Version
©2021 Debate.org. All rights reserved.