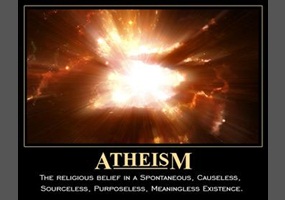 Is there no proof that God does not exist?

Asked by: knocknoc
United States, God
Is there no proof that God does not exist?
77% Say Yes
23% Say No
Leave a comment...
(Maximum 900 words)
sweetbreeze says2013-07-03T10:56:06.633
Report Post
Hey, don't look at me, I'm not in this.
chatpaltam says2013-07-03T23:36:23.630
Report Post
The question is worded so that im not sure what the question is.
Do you mean IS there proof that god does or does not exsist? Well we can reason,
there is proof God exists, simply look around. Our earth is one of a kind.
There is no way all this is evolution. There is no logic for things to evolve the way they have.
In evolution things would have evolved on the basis of need.
Why does any organism once alive and thriving need to evolve?
Where does an organisms brain come from with the power of reason?
Why would any living object have desire to change if its alive to begin with?
Why do humans have a desire to live forever, and seek approval.
Evolution does not explain mankinds foolish violence.
Its still a debate after all these years.
If there is no God, then why do we care so much? Why is there so much violence over it?
Where then would our hope for our future lie?
If there is no God, then the earth would be more violent than it is for no one would have any moral compass what so ever and people would either kill each other out of animalistic violence, or the world would be all good because no one would have reason for competition.
We all would have the same things.
But we dont.
Something drives many humans to be greedy, selfsh and violent.
And there is something that drives other humans to worship an unseen being with faith hope and love
liscense2kill007 says2013-07-04T22:22:06.223
Report Post
^ Dang no longer first
liscense2kill007 says2013-07-04T22:25:41.057
Report Post
Got into reading you argument, and well I hate to break it to you, but there is inhibition to kill each other and steal etc born into us all, nothing to do with any religion. There is a reason what is considered illegal has been similar across the world since the Code of Hammurabi.
arrivingatdeparture says2013-07-05T04:54:07.767
Report Post
God is unfalsifiable, guys; is there no proof that god does not exist? Yes; is there no proof that god does exist? Yes = Unfalsifiable.
Privacy Policy | Terms of Use
Sitemap | View Desktop Version
©2021 Debate.org. All rights reserved.