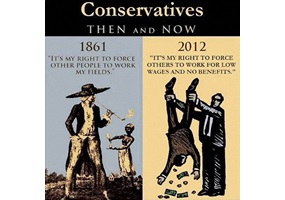 Asked by: Batmangeek75
It's not okay to be a conservative.
33% Say Yes
67% Say No
Leave a comment...
(Maximum 900 words)
Innocent says2021-06-27T14:20:41.663
Report Post
Flip it the other way, The left believes that it is okay to take the money that you make. Lets talk about what that means. What do you call a system where you are not allowed to reap the benefits of the fruit of your labor? Did anyone yell out slavery? That is correct! In point of fact here are some of the things that the slave masters said about their slaves.