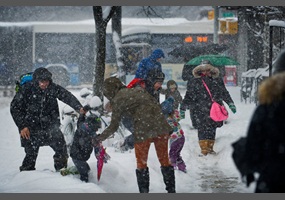 Mayor of New York refused to close schools for snow. Was this a wise decision?