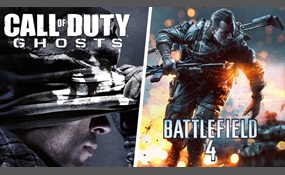 Which is a better game

Mister_Man says2015-09-08T16:04:43.9246847Z
Report Post
I like COD4 and MW2/3 a lot more than any of the Battlefield games. I like the idea of Battlefield, having a nearly fully destructible environment as well as huge maps and a large number of players, but I enjoy the fast-paced run and gun gameplay style of cod. However I can't stand the new CoDs with the high jump and all that junk. It seems like CoD has gone downhill and Battlefield has been getting better.

Battlefield is a series of first-person shooter video games that started out on Microsoft Windows and OS X with its debut video game, Battlefield 1942, which was released in 2002. The series is developed by Swedish company EA Digital Illusions CE an... d is published by American company Electronic Arts. The series features a greater focus on large maps, teamwork and vehicle warfare than traditional first-person shooters. The PC games in the series are mainly focused on online multiplayer. The Battlefield series has served more than 50 million players worldwide as of 2012, across 11 games and 12 expansion packs released since its inception in 2007. The series has a recognizable 6-beat sting   more
8 votes
4 comments
Battlefield - Voter Comments

Donderpants says2015-09-08T10:24:40.3760645Z
Report Post
I don't particularly like either. Neither is anywhere near my favourite list of games, but Battlefield is probably less far away than CoD.

Counter-Strike: Global Offensive is an online tactical and first-person shooter developed by Valve Corporation and Hidden Path Entertainment, who also maintained Counter-Strike: Source after its release. It is the fourth game in the main Counter-Str... ike franchise.Counter Strike Global Offensive was released on August 21, 2012, and made available for Microsoft Windows and OS X on Steam, Xbox Live Arcade, and a US-only version on PlayStation Network. The Linux version was released in September 2014. It features classic content, such as revamped versions of classic maps; as well as brand new maps, characters and game modes. Cross-platform multiplayer was planned between Windows, OS X and PSN players, but was ultimately limited to Windows and OS X because of the differences in update-frequency between systems. The PSN version offers three input control methods, which include using either the DualShock 3 controller, PlayStation Move or USB keyboard/mouse   more
3 votes
0 comments
Counter-Strike: Global Offensive - Voter Comments
No Comments
Vote & Comment
No comments yet.
Leave a comment...
(Maximum 900 words)
Privacy Policy | Terms of Use
Sitemap | View Desktop Version
©2021 Debate.org. All rights reserved.