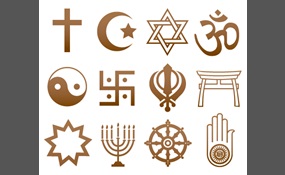 Do You Believe You Have to be Religious to Have Good Morals?

perfect5outof7 says2017-04-12T12:22:03.0242875Z
Report Post
People I've seen with the most moral high ground have been non-religious, and some of the worst I've seen have been religious. Also, not all religion are built around the idea of making you a better person.

ErinDrake11 says2017-04-12T22:15:25.2425965Z
Report Post
Assuming you have to be religious to have "good morals" Is hilarious. So lets start with the decisions of what are good and evil. This is a heavy debate in philosophy, and there are many convincing arguments for many positions. However for This proposition to be true you would have to accept that any given holy book is the best book written on morality in history. Deontology, Utilitarianism, Contractarianism all have meta ethics that work better than these holy books and can be excepted completely god free.

Gareth_BM says2017-04-13T20:04:42.8640795Z
Report Post
I would suggest that a system of ethics based on a handful of principles or philosophical concepts can lead to a more consistent moral system than a moral system based on following a religious text. A system of absolutes, thou shalt no, is not a practical moral system work around. As a utilitarian I think that a more reliable ethical system is to simply choose what ever will result in a net increase in wellbeing and reduction in suffering within that specific situation.

ChrisArthur says2017-04-14T11:16:27.2388713Z
Report Post
Even religious people are capable of sinning. Not to mention, Hitler was actually religious and was believed to perform a genocide against the Jews simply because they were the ones talked about in holy texts who tortured and crucified Jesus. The Ku Klux Klan was religion-oriented and sworn followers of Christianity. The Westboro Baptist Church is obviously very religious.

Schuhler says2017-04-26T13:51:12.4933969Z
Report Post
As an atheist, I've found I have better morals than many practicing Christians I know. What's wrong with being a good person so that you feel you're a good person?

austinhernandez says2017-04-29T06:14:38.7761404Z
Report Post
When I think k of why something is right or wrong, I think about the harm it might cause to someone and think of how I would feel if I was in their shoes. That's called empathy, and that's what morality is based off of. Religion was invented by man to to explain things such as morality, but religion is actually the opposite of morality. Religion is following commands, no matter what is right, such as the majority of Muslims believing that any Muslim that leaves should be killed. Following commands is not morality. Computers do that all the time but they don't know what morals are.
Vote & Comment
2

Jonbonbon says2017-04-12T20:12:17.8894744Z
Report Post
The Bible says that men and women were created in the image of God, which scholars agree refers to his spirit. That means that within each person is the ability to follow a morally good path. Other Christians may disagree with me, and there's a lot more to my worldview concerning morality and such, but the answer to this particular question is the same.

BritFriend says2018-11-02T19:25:32.4088117Z
Report Post
No Morals and religions are separate. In fact, Religion without taking morality into account can cause a lot of suffering
Vote & Comment
3

Tradesecret2 says2017-08-13T06:08:48.8037799Z
Report Post
I said yes because the adjective "good" was used. If the question had been simply morals then it would have been no. The bible teaches that no one is good except God. Good is therefore defined as "that which is in accord with God's standards". I am choosing to use God's definition as opposed to the dictionary understanding of good which in this instance is to defined as "not bad" or as that which seeks to do good or right. It is not really much of a definition but it Is the dictionary. I take the view that all people have a moral position. Not everyone has the same morals. And I also think that non-Christian people do things which are not evil. so Jesus would agree when he said that they would not give his child a snake if they asked for an egg. But being moral in accordance with the world is quite different to being good in the sight of God. I don't think that the non-religious can have good morals that arise from their own worldview but given that they have some it is because they have appropriated it from elsewhere.
Vote & Comment
4

FreedomBeforeEquality says2017-04-24T00:12:36.0733944Z
Report Post
Having good morals isn't really logical and doesn't come naturally to most. I'm sure there are people on both sides that can have good morals but it definitely takes some outside teaching (call it a religion or whatever you'd like) to get people to that place. People are not inherently good by nature and morality is definitely not some relative/subjective thing that someone can just say "I'm morally right" and get away with.
Vote & Comment
Leave a comment...
(Maximum 900 words)

ladiesman says2017-04-14T20:17:37.7819473Z
Report Post
The problems occur when someone or a group does something wrong and they twist their religion to rationalize or justify it. Examples include Warren Jeffs, ISIS and predatory Catholic priests.

missmedic says2017-04-15T14:50:53.0402900Z
Report Post
A lot of horrible things in this world get done for something greater then ourselves. God who would make salvation depend on believing in him on bad evidence.

ItsMissCandice says2017-04-18T10:18:15.2572689Z
Report Post
Absolutely! I'm a devout and proud Christian! The thing is, without Christianity, we wouldn't really know what was right and what was wrong because ultimately, without Christianity, there would be no God and if there were no God, then there would be no objective morality, there would only be subjective morality and subjective standards of morality! Without objective morality, everything is subjective. Subjective morality just won't work! Most atheists adhere to cultural and/or moral relativism. In my opinion, these two notions of morality are absolutely terrible, and I'll explain why by dismantling them both for you below. For a moment, let's just say hypothetically that morality was indeed subjective. Because of this, morality would not be unchanging, it would be ever changing. What's moral or immoral today, may not be moral or immoral tomorrow in this hypothetical world. The true reason that subjective morality just won't work is because of the subjectivism that accompanies it! Just because an individual personally believes that something is moral or immoral does not make it so, as this is subjective. We have to look to something higher. For example, an individual who adheres to supposed subjective morality could believe that something immoral was moral, and in a true society or world, etc, that truly embraced subjective morality, we would not be able to say to the individual who believes that something immoral was moral, was or is, wrong because it'd all be based on their personal standards and beliefs of morality. The reason obviously being that, with subjective morality, subjective standards of morality come along with it. Again, this just won't work. In the hypothetical world that embraces subjective morality, everybody's standards may have similarities, but a similarity or similarities are just not good enough when it comes to things like morality, as morality is of the utmost importance as it is something that every individual adheres to. The same logic can be applied to cultural relativism. What if an individual is living in a culture where truly immoral things are not seen as immoral, therefore they are allowed?! Does that make the immoral acts suddenly moral just because a culture or even many cultures believe that this hypothetical immoral act, is indeed moral?! No, of course not! It's still objectivity wrong, no matter what an individual or culture or anything else that is subjective, believes. As I'm sure you're all aware, there are countries that commit the most awful atrocities. Now, because these atrocities are acceptable in their culture, does that mean that these things are permissable, or moral and not immoral? Again, of course it doesn't! But these are the types of notions that you must subscribe to if you truly believe in subjective morality. You must believe that unless an individual themselves, or a culture believes that something is right or wrong, by their own subjective standards that is, then that is what it is! But as I've just proven by dismantling subjective morality for you all, this whole subjective morality thing just won't, and doesn't might I add, work! C.S Lewis said in The Abolition Of Man, pointed out that when he looked around at every single diverse culture in the world, they all agreed on basic morality. C.S Lewis was a Christian if you're wondering, too. The thing is, he is right. We all recognise, whether you want to acknowledge it or not is another matter, but we do all recognise some kind of moral code that is objective. We all agree that certain things in particular are truly moral, and we all agree on certain things that are truly immoral. This just proves my point that objective morality always has been and always will be objective, and that objective morality always has been a truly beautiful gift from our Lord God!

FreedomBeforeEquality says2017-04-24T00:29:53.1301944Z
Report Post
I agree Miss Candice. Religions set an objective morality. In fact though, there being multiple religions at all makes the entire thing have a very subjective feel, since you could essentially just find or make up the religion that best backs your moral preferences. Being good takes work. Living in a society with others takes work. Not having religion around sounds like something someone who doesn't want to put in that work would advocate for. If we have people so unwilling to follow simple social tenets like "Thou shall not steal" or "Thou shall not covet", so much so that they get uneasy just having you teach things like that to others around them, then we have found the root of where social problems actually arise from in our society. It comes from people not willing to put in the work to live in a modern society amongst the rest of us peacefully.

Iacov says2017-04-24T13:32:01.5689255Z
Report Post
So ItsMissCandise do you think that is only applicable in the case of Christianity or would any other religion work just as well in the same scenario, or pherhaps only certain religions excluding others?

Iacov says2017-04-24T13:33:05.3573255Z
Report Post
So ItsMissCandise do you think that is only applicable in the case of Christianity or would any other religion work just as well in the same scenario, or pherhaps only certain religions excluding others?

BritFriend says2018-11-02T19:30:48.0801016Z
Report Post
No Religion does not always even teach morals as the recent occurrences in this country with Christians in government shows - xince a lot of them don't seem to know right from wrong including ignorance of the 6th commandment which states Thou shalt do no murder. They are always wanting to kill or imprison those who believe differently from themselves which goes against the 6th commandment, The love thy neighbor commandment, And the statement in the bible that states that the shedding of innocent blood is one of seven things God hates most (book of Proverbs) Religious people can be very moral and good people but sometimes their morality depends more on their whims and what they want than what is objectively right and wrong.
Privacy Policy | Terms of Use
Sitemap | View Desktop Version
©2022 Debate.org. All rights reserved.