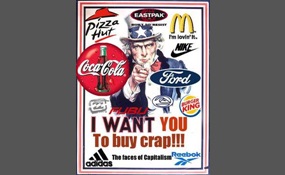 There is a growing movement of anti-capitalist in the modern world. Primarily due to issues such as income inequality, corporate greed, corporate money in politics, etc. Does capitalism need reform in order to address these dilemmas and much more in a brave new world.

Yes reform is a must in the information age. Capitalism is flexible and could be reformed to suit the needs of all branches of society

(You don't have to base your decision of my argument)
19 votes
8 comments
Yes reform is a must in the information age. Capitalism is flexible and could be reformed to suit the needs of all branches of society - Voter Comments

Wylted says2015-10-13T04:00:59.1502721Z
Report Post
It isn't actually capitalism because Democrats ruined it, but yes it should be more in line with what Austrian economists propose

komododragon8 says2015-10-13T04:04:12.0511879Z
Report Post
The wealth inequality is not good for our economy. The more disposable income the middle and lower class have the better (they are more likely than the rich to spend it on expansionary goods).

Robkwoods says2015-11-19T16:54:41.0954613Z
Report Post
Capitalism itself is not what needs to change. Capitalism is just says you have capital and you can spend it as you please. Capitalism needs a foundation and the best foundation is free market. This economic system is autonomous and void of immoral bias.
Vote & Comment
2

No, capitalism is meant to be that way and reform would just lead us closer to oddieties that are not capitalism.

(You don't have to base your decision of my argument)
8 votes
1 comment
No, capitalism is meant to be that way and reform would just lead us closer to oddieties that are not capitalism. - Voter Comments

John_Ostroff says2015-11-02T21:54:24.4653827Z
Report Post
We are no longer a Capitalist nation. We have already reformed capitalism in the way of Third-Way economics, long ago. We are merely Capitalist-In-Name-Only.

imperialistpunksfrickoff says2015-12-12T17:39:27.0055765Z
Report Post
As long as the bourgeoisie owns the means of production the worker will always be abused in society. Forced to sell his labor as it is the only way to survive. Reforming Capitalism only masks the real problem and convinces the people that they are content. In reality these problems will always exist until the means of production are owned by the worker's and reforming Capitalism will never be a route achieve this goal.
Vote & Comment
Leave a comment...
(Maximum 900 words)

58539672 says2015-10-13T03:55:17.2573036Z
Report Post
If you are ever wondering what economic system is best for you, look at the problems with that system and try to find the ones that you can deal with. It doesn't matter whether it is capitalism, communism, or socialism, they all have problems that are unique to them. Their is no right answer, and their is definitely no perfect solution.