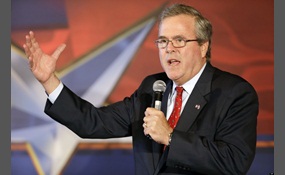 In an election between Jeb Bush and Elizabeth Warren who would you support?

John Ellis "Jeb" Bush served as the 43rd Governor of Florida from 1999 to 2007. He is the second son of former President George H. W. Bush and former First Lady Barbara Bush, and is the younger brother of former President George W. Bush. Jeb Bush is...  the first and only Republican to serve two full four-year terms as Governor of Florida.Bush grew up in Houston, Texas. He attended the University of Texas, where he earned a degree in Latin American affairs. Following his father's successful run for Vice President in 1980, he moved to Florida. In 1986, Bush was named Florida's Secretary of Commerce, a position he held until resigning in 1988 to help his father's successful campaign for the Presidency.In 1994, Bush made his first run for office, narrowly losing the election for governor by less than two percentage points to the incumbent Lawton Chiles. Bush ran again in 1998 and beat Lieutenant Governor Buddy MacKay with 55 percent of the vote. He ran for reelection in 2002, and won with 56 percent, to become Florida's first two-term Republican Governor. During his eight years as governor, Bush was credited with initiating improvements in the economy, environment, and health care, as well as reforming the education system. He was also responsible for ending the Florida high speed rail initiative   more
6 votes
0 comments
Jeb Bush - Voter Comments
No Comments
Vote & Comment
2

Elizabeth Ann Warren is an American academic and politician, who is the senior United States Senator from Massachusetts and a member of the Democratic Party. She was previously a Harvard Law School professor specializing in bankruptcy law. Warren is...  an active consumer protection advocate whose work led to the conception and establishment of the U.S. Consumer Financial Protection Bureau. She has written a number of academic and popular works, and is a frequent subject of media interviews regarding the American economy and personal finance.In the wake of the 2008 financial crisis, Warren served as chair of the Congressional Oversight Panel created to oversee the Troubled Asset Relief Program. She later served as Assistant to the President and Special Advisor to the Secretary of the Treasury for the Consumer Financial Protection Bureau under President Barack Obama. In the late 2000s, she was recognized by publications such as the National Law Journal and the Time 100 as an increasingly influential public policy figure.In September 2011, Warren announced her candidacy for the U.S. Senate, challenging Republican incumbent Scott Brown. She won the general election on November 6, 2012, to become the first female Senator from Massachusetts. She was assigned to the Senate Special Committee on Aging; the Banking, Housing, and Urban Affairs Committee; and the Health, Education, Labor, and Pensions Committee   more
6 votes
4 comments
Elizabeth Warren - Voter Comments

NedStarkshead says2014-06-04T08:15:51.8000583-05:00
Report Post
This is not even close Elizabeth Warren is by far better and is more intelligent ,educated, politicly superior,and she hates corporate and banking deuchebags and is resposable for regulating them as much as possible .Bush is a Bush and how pathedic is the Republican party to have a third Bush in the Last 20 years especially when W Bush destroyed our country less then 10 years ago and we are still in recovery from the Republican dickheads
Vote & Comment
3